On A St. Croix Rainy Day, What Is There To Do? 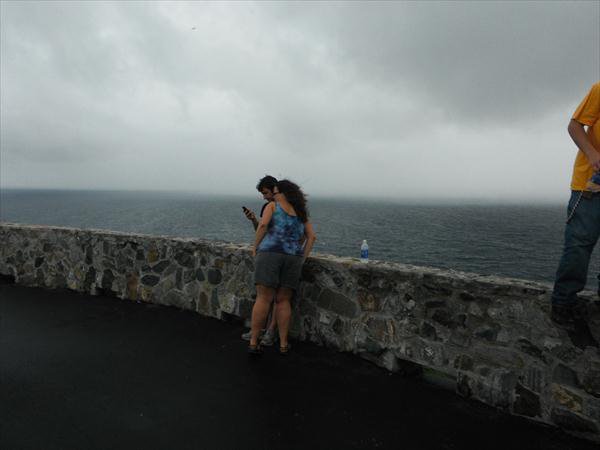 A rain squall off Point Udall.

Starting with basics, there is no such thing as a bad day in Paradise. If it starts to rain think about snorkeling. No worries about lightening or thunder, we only get that a few times a year and no more than one or two days a month. You guessed it, it only occurs in September, October and November. If you think you hear thunder, get out of the water, but don’t worry greatly, getting hit by lightning has never happened so you have a better chance of winning the lottery because somebody eventually wins.

Snorkeling is usually good because the fish are already wet and don’t pay any attention to the rain. As a matter of fact, you will also be wet so won’t even notice if it’s raining. Now personally, I consider it too cold to swim between Thanksgiving and Easter, when water and air temperatures drop to 80-82 Fahrenheit. I do tend to suffer when it gets that cold.

It’s also a good day to head to a beach bar for lunch. At some locations, you can listen to the sound of the rain dropping on a tin roof, with others you are close enough to watch the raindrops splatter on the water. Have a beautiful day and since locals are dependent on rain for water, they all love rainy days and you will be well served.

If you find it difficult to accept the idea of swimming in the rain, take a hike. While St. Croix gets about 43 inches of rain per year, it is not evenly distributed by the month of the year or location. Point Udall, the southeast beaches, Sandy Point, and Judith’s Hill get about half that amount and our rain-forest gets more. (Actually, it’s not quite a rain-forest: it is called a Tropical Moist Forest but it still gets more rain than the rest of the island.

On one particular rainy day a couple of years ago, I decided to head east to Point Udall because this is theoretically the driest part of the island. When we got there a squall was starting to roll in but there seemed to be fewer clouds along the south shore than on the northern side of the island. Since Jack’s Bay and Issac’s Bay are in close proximity to Point Udall and looked like they would get rain, we decided to go to Manchineel Bay, also called Ha’penny Bay with a commitment to keep on heading to the other dry area near Sandy Point, if it continued to look like rain wherever we stopped along the way. 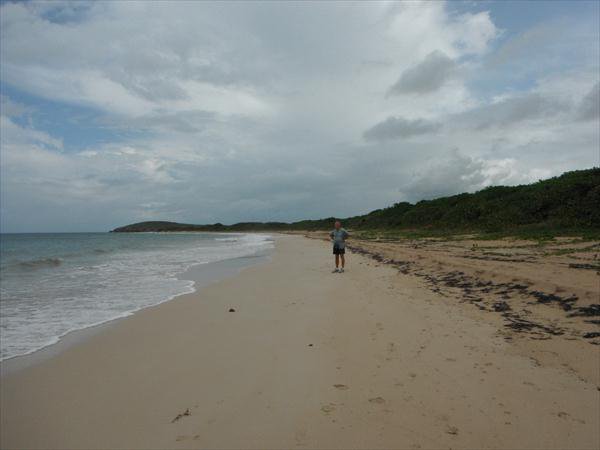 Overcast but not Raining

The sandy beach is over a mile long so it will take twenty mines to walk it completely in each direction. We decided to take the chance because there was nothing much else that anybody wanted to do. 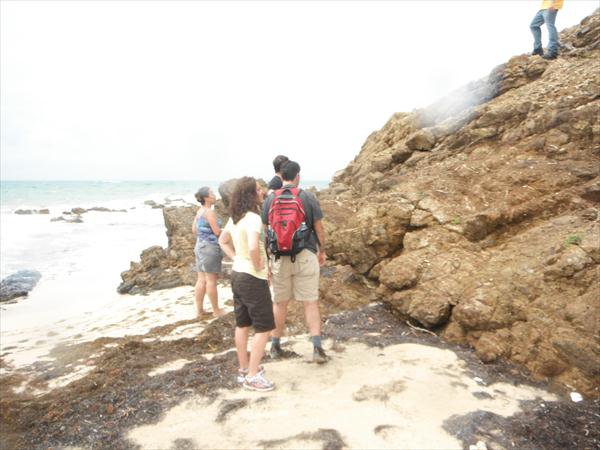 End of the Beach

By the time we reached the end of the beach, the clouds had moved on, although an astute observer will notice the effect of a raindrop on my lens in the upper right hand corner. 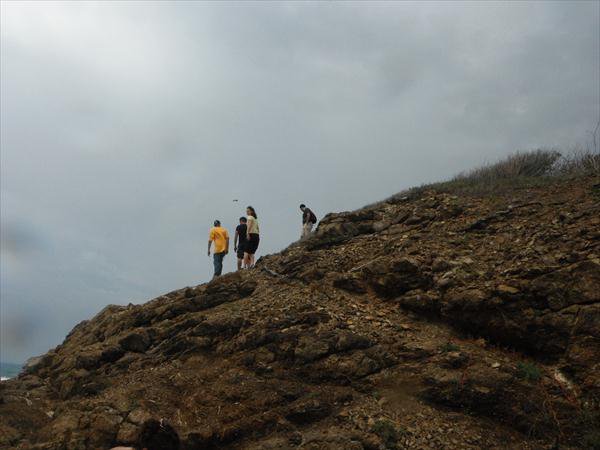 Despite being damp and slightly slippery all the young people had fun climbing the hill. 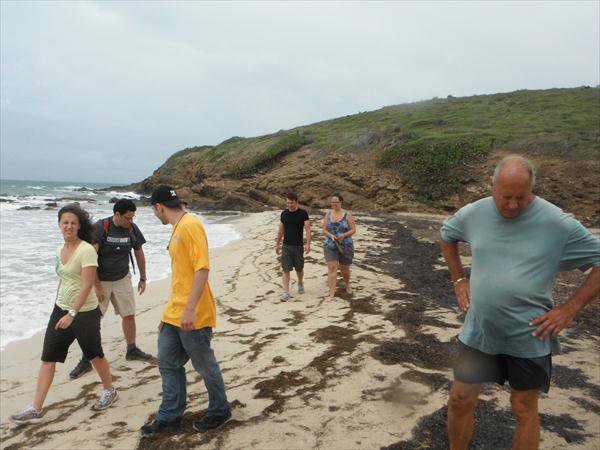 Bright Skies for the Hikers.

As we start our return we have bright skys at our end the beach but it looks like we are going to get soaked. 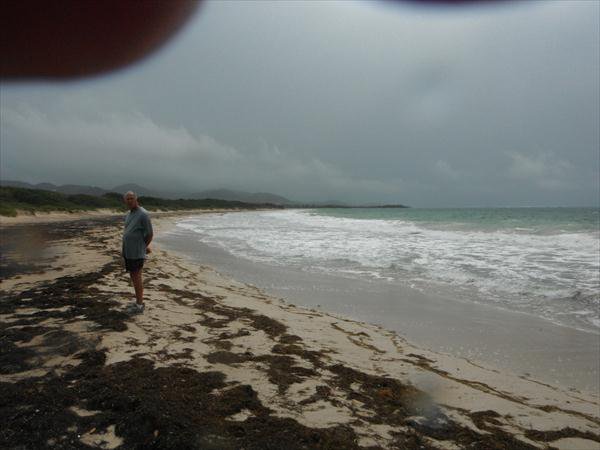 The rain is rolling in the other end.

As we start to return to our cars, the weather looks horribly like we will get drenched, but we have no other choice. Our car is parked at that end of the beach.  The dark spot is the shadow of my hand trying to keep the lens from getting hit by the occasional rain drops. 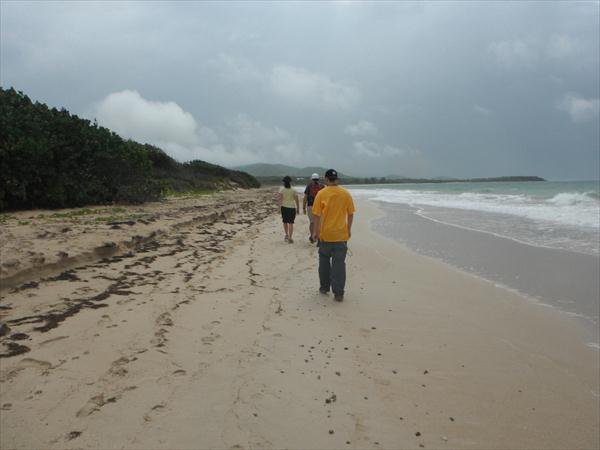 The weather gets better

As we walked, the weather cleared up again. In fact, on a two hour walk, we never even got wet from a decent shower.

I have been hiking the hills and beaches of St. Croix, Virgin Islands for over 35 years and in retirement, decided to become a Heritage Hiking Guide specializing in the local history, geology, plant life and environmental changes that accompanied all groups of settlers over the last 3000 years. Unfortunately, aging of my body has temporarily limited my aggressive physical activity and I am using my intrinsic curiosity to explore the very obscure history of St. Croix prior to World War I. The oldest recorded History was dominated by the actions of Absolute European Monarchs who claimed ownership of the Island. Of course, all their actions were reported upon by official scribes who were controlled by censorship. Regardless of the outcome, reports were always positive until the king was dead and a new monarch crowned.
View all posts by John Boyd →
This entry was posted in Manchineel Bay, Uncategorized and tagged hiking, Sandy Point St. Croix, St. Croix Hiking, walking. Bookmark the permalink.

1 Response to On A St. Croix Rainy Day, What Is There To Do?