In Search of the Du Bois ‘Castle’ – Danger in Paradise

It’s been months (five) since I’ve published anything about hiking on this blog as all my writing time has been focused on my book. It’s not that I’ve quit walking or going on hikes, I have just been spending all my desk time devoted to finishing and publishing my book, “Caribs:The Original Caribbean Pirates & Founding Fathers of American Democracy” which is available in a (Kindle Edition) and (Paperback Edition). Since I can only stand to sit at my desk about five hours a day, I have still been hiking and looking for new historic trails to walk as the Island of St. Croix has 5000 years of Amerindian occupants and over 500 years of European occupants.

One of the more intriguing questions is the location of the “castle” of the French Governor du Bois who ruled from 1659 to until perhaps 1665. If you believe in the fantasies presented in romantic histories, this problem was solved about 50 years ago when the ‘castle’ was located in the heart of an upscale neighborhood called Judith’s Fancy. Florence Lewisohn simply asserted than the mansion was located in Estate Judith’s Fancy and “The ruins of this residence stand today, done in the old French style with a small chateau with two unusual towers at either end, one of which is still there.”

Unfortunately, there are several problems with the Judith’s Fancy location, not the least of which is there is no tower in the vicinity of the ruins. Also, a 1920 report by the USGS places the castle high on a hill (303 foot) instead of the flat lands of Judith’s Fancy. While both sources place the castle to the north of my house, there are no hills in the area with ruins on them and none are above 238 feet. 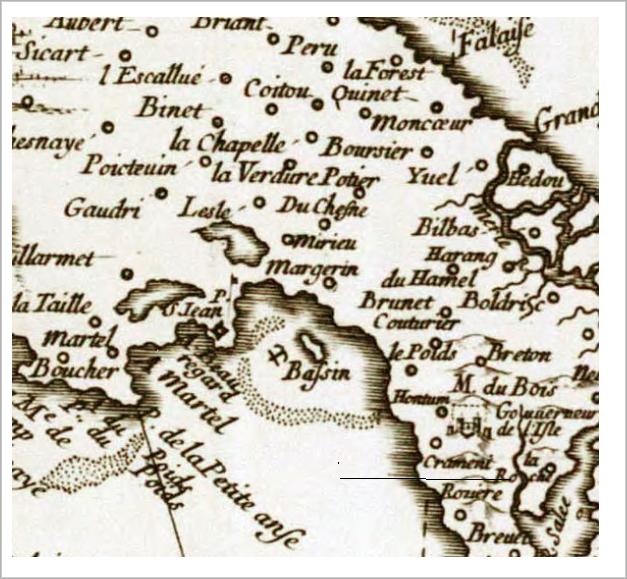 Like all good mysteries, I started with an old Map from 1671 and ended with a feeling that I was replaying the spooky ending of the Da Vinci Code including a muscular young guy (bare to the waist) and a couple of unrestrained pit bulls.

The French Map of St. Croix from 1671 is drawn in a manner that South is towards the top of the page. Over the years as ownership changed from French to Danish to American, there have been several changes in name and only those who study history are aware of the old names. The same 1920 inventory of estate names refers to the top of the Hill I live on as Crameni or Soldier Hill. It is now referred to as Judith Hill but that is unnecessary because the map is good enough to place my house on Crameni Hill with Christiansted Harbor (Bassin) to the East, Salt River to the West and Judith Fancy to the North. In this map, the Governor’s castle is shown on a hill almost due South of Crameni.

The next step was to get a copy of the 1958 topology map of St. Croix and check the topology and roads on the hill south of mine now identified as Judith. Indeed, their is a road which takes you to the 300 foot level and it shows houses on that road prior to 1952. Interestingly enough, the road does access Queens Quarter and so I got two friends to take a hike so we could explore any ruins. Before we could reach the end of the road as shown on the map, we found a house built in the middle of the road blocking our path.

And then, we were attacked by two very aggressive pit-bulls. Now I always carry a walking stick and one friend uses “the voice”. I guess these dogs have never heard of Darth Vader because they kept on attacking him. I was able to keep the one dog at bay with my walking stick but that only made it worse for my friend as both dogs went after the guy who relies on his voice to tell the dogs to go home.

After the dogs had backed us 50 feet down the street, a young man came out of his house wearing only shorts and attempted to call the dogs back. They ignored their master until they backed us another 50 feet down the road. Once he had the dogs under control, I asked him if I could take a picture of Christiansted Harbor from the public road. He answered his father doesn’t like that and the dogs were not yet completely under his control so I missed a very scenic shot.

Now this would be the end of the story if Google Earth did not exist but I decided to go back for another look or to to see if there were any ruins on the hillside. The shot below shows a ruin over the word Navy at the bottom (center) which when you look due north points to my house on the opposite hill.

The final picture is as close as I can get on Google Earth without breaking up and shows an exceptionally large house on what appears to be an artificial plateau. The house appears to block the historic road and access to the ruins. The plateau is clearly visible on the 1958 topology map.

Close up of Ruins

The interesting aspect about the ruins is on the east side where there is a circular base for a tower. It is unlikely this is a windmill as it is down hill from the square building and all windmills were built uphill from the factory with the cane juice running downhill. One possible explanation is that this is a “small chateau with [one] unusual tower” and is the Governor’s Castle.

Now whether this is the Governor’s Castle from the Knights of Malta Era or not should not be the message of this post. When walking in areas new to you, you should be aware of all Safety issues. The biggest ones in St. Croix not only includes dog attack, but there are issues with insect bites, dehydration, toxic plants, lack of cell phone coverage in some areas and no easy way out if you have problems. Most of our older hiking guides have the experience to keep you out of harms way.

I have been hiking the hills and beaches of St. Croix, Virgin Islands for over 35 years and in retirement, decided to become a Heritage Hiking Guide specializing in the local history, geology, plant life and environmental changes that accompanied all groups of settlers over the last 3000 years. Unfortunately, aging of my body has temporarily limited my aggressive physical activity and I am using my intrinsic curiosity to explore the very obscure history of St. Croix prior to World War I. The oldest recorded History was dominated by the actions of Absolute European Monarchs who claimed ownership of the Island. Of course, all their actions were reported upon by official scribes who were controlled by censorship. Regardless of the outcome, reports were always positive until the king was dead and a new monarch crowned.
View all posts by John Boyd →
This entry was posted in Judith (Soldier) Hill, Judith's Hill, Knights of Malta, Pirates, Uncategorized and tagged hiking, Knights of Malta, Pirates, salt river bay, St. Croix Hiking, St. Croix History, St. Croix Vacation, St. Croix Virgin Islands, vacation, walking. Bookmark the permalink.