Cross Country with a Compass

Most people with a military background are familiar with the basic use of a compass although it is rapidly being replaced by GPS and Google Earth. Also, the Garmin application for a cell phone does a credible job of tracking you and displaying where you have been and where you are. The only problem with GPS cellphone aps is they use a lot of power and could kill your battery when you need it the most.

Now there are two reasons to use a compass, one is to keep you on a straight line if you are lost which is highly unlikely on an island that is only six miles wide (it has happened) and the other is based on the use of a map to get from where you know you are to where you want to be.

Our family has a weird idea of fun and when my niece Cait visited, we decided to do a compass walk from the top of Judith’s (Soldier) Hill to the Judith’s Fancy Gate. This is approximately the path taken by Indians and Pirates who were lookouts at the top watching the sea to warn the main group about approaching enemies.

Now this type of walk takes a little planning and map reading skills. The satellite view from Google Earth will show you the starting and end point but it doesn’t do much to show you the steepness of hills. Notice the cleared field across from the gatehouse which gives us a bigger target. This feature will be transferred in a rough manner to the topological map. 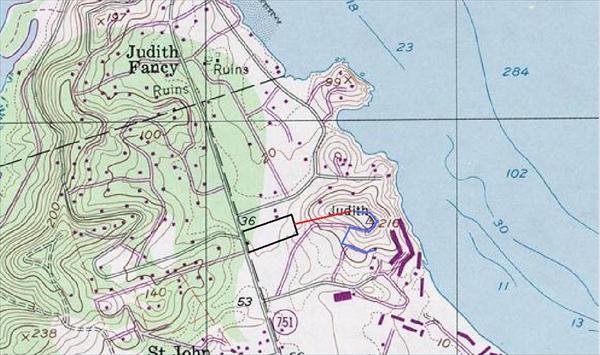 An old fashioned topological map does a better job of showing you the lay of the land. Hilltops are fairly obvious because they are marked. On the side of the hill where the contour lines are close, you have a steep slope and unless you are prepared for mountain climbing you should avoid those areas. Where the lines are spaced far apart, there are gentle slopes. Unfortunately, On St. Croix we have Guinea Grass on the leeward side of hills, especially on gentle slopes. 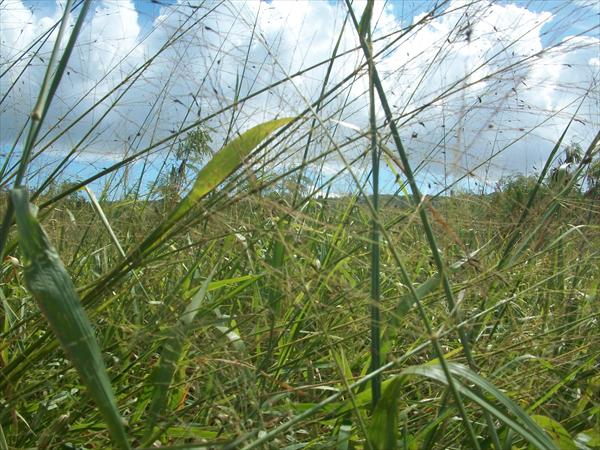 Guinea Grass (above), also called saw grass because it will cut you, is often 6 to 8 feet tall. At the time of Pirates and Indians, there was no Guinea Grass on the islands so in all probability, they took the gentler walk to the South West. We decided to avoid that problem with a more westerly path which was West South West from the end of old developers road still visible on Google earth. The blue path is the walk from my house to the top of Soldier Hill. The red line is our proposed path.

So how did we do?

The answer is pretty well.

As expected, there are obstacles which you have to walk around and then attempt to get back on the original path. Unfortunately, this is not always possible.

Satelite Tracking of Our Actual Path

So after being diverted to the south about halfway between the peak of the hill and the open field we found we could not make a correction because the brush was too thick. We took our best guess at a course correction and walked due west coming out exactly where we planned and Cait led by compass the whole way because you really couldn’t see a clear path.

She was so proud of herself, I just had to challenge her to go due south which is directly through very heavy and tall saw grass which we had so expertly avoided up to that point. Once inside you could not see the beginning where we started, the end where we wanted to go and there were obstacles in every direction. Without the compass, our only guide to due south was the sun but that is another story. We survived and that was just one more little adventure in our lives.

When I suggested that she would never do that again, she protested and said there are other family members that need to be initiated. The pictures of Cait leading the way are at Facebook.

I have been hiking the hills and beaches of St. Croix, Virgin Islands for over 35 years and in retirement, decided to become a Heritage Hiking Guide specializing in the local history, geology, plant life and environmental changes that accompanied all groups of settlers over the last 3000 years. Unfortunately, aging of my body has temporarily limited my aggressive physical activity and I am using my intrinsic curiosity to explore the very obscure history of St. Croix prior to World War I. The oldest recorded History was dominated by the actions of Absolute European Monarchs who claimed ownership of the Island. Of course, all their actions were reported upon by official scribes who were controlled by censorship. Regardless of the outcome, reports were always positive until the king was dead and a new monarch crowned.
View all posts by John Boyd →
This entry was posted in Boyd's Botanica, Judith (Soldier) Hill, Uncategorized. Bookmark the permalink.