On my walk through Princess from the Palms Hotel to Quality Market and back, I was able to count 47 different plants I could identify by their common name. Once that is done, it is relatively easy to find the Latin name, the medical and food value of the plant and where it came from. With that information you can make an educated guess as to witch group transplanted the plants to St. Croix and what motivated them.

One of the joys I have in life is learning about the plants of St. Croix and trying to figure out why they are here at all. Of course, there are the plants placed here by the hand of God or the will of Mother Nature depending on your perspective, then there are the plants which arrived by the hand of man who has continually changed the environment for 2000 years. While it is cute to think of noble Indians who lived in complete harmony with nature and did little to alter the environment, nothing could be further from the truth.

In the simplest of terms, every major group who came and occupied the Islands has altered the environment by the plants they imported and by the farming methods they chose to use. We can only hope that they were doing the best that they knew how to care for their families and to improve their own position in life.

My starting point was to identify and photograph all of the identifiable plants along my walk and they are posted in a photo album at facebook.com/hikestcroix. In the following post, I have selected ten species with interesting stories and tracked the origin and information on the species. Some native plants survived the onslaught of our various occupiers because they were found to be valuable or else they were impossible to kill and each subsequent group brought species important to them. 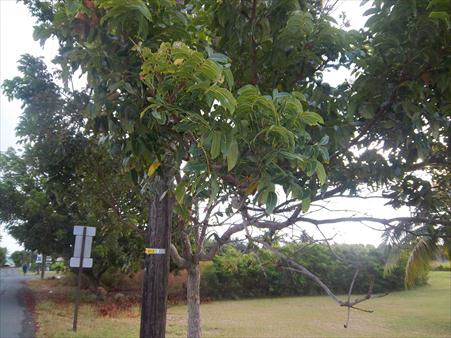 Mahogany (Swietenia mahagoni) is a native American word originally used for the wood of the species known as West Indian Mahogany. I have seen this growing in most of the Leeward Islands and it is the majestic tree that has that lovely red wood that most people love for furniture and art pieces. It occurs naturally in the rainy moist forests of St. Croix on the west end of the islands and has been planted by many homeowners as shade trees all over the island. Thus, it is not surprising to find it along roadsides in the Princess area.

White Manjack (Cordia dentata) is another native species which survives even though it has little economic value in the Virgin Islands simply because it is virtually impossible to kill. Never park a car under the tree as the sap from the berries will strip the paint off you car. Even droppings from a bird which has eaten the berries will destroy the finish.

It is unlikely that anyone other than God or Mother Nature brought these plants to the islands as the former is on every one of the leeward islands and the latter is so disgusting no one would have brought it. When the Neo-Indians arrived, they seemed to bring every species of economic value to them to see if it would grow. Furthermore, they would have engaged in slash and burn agriculture which was common to both north and south American Indian Tribes. This method enriches the soil for a couple of years before a new area must be burned and there is a never ending cycle of burning new land, farming it until the soil is depleted and then moving on to “greener pastures.”

It should be pointed out that there were probably two waves of Indian migration to St. Croix, one from the west which was Tiano or Arawak in nature who probably island hopped from the Yucatán Peninsula and brought stone working knowledge and another from the south, the Caribs who brought their own foods and plants. St. Croix would appear to have plants brought here from both Mexico and South America, many of which have been classified as “Pre-Columbian Native Species.”

Carica papaya is the name of the local papaya tree and is derived from from its Caribbean name in the Taino language. Papayas can be used as a food, a cooking aid, and in medicine. The stem and bark are also used in rope production. It was first cultivated in Mexico several centuries before the emergence of the Mesoamerican classic cultures or about 200-300 years BC.

Agave tequilana, commonly called blue agave or in Spanish, Maguey has has been cultivated at least since 200 CE or the beginning of the Mesoamerican classic cultures and wild plants have been used for far longer. Fibers can be extracted from the thick leaves to make rope or fabric and its thorns can be used as needles or punches The name “maguey” was given by the Spanish, who picked it up from the Taíno as they were taught to make alcohol from the cactus. The use of the pulp at the heart to make an alcoholic beverage extends far back into the Mesoamerican period, when it was considered sacred, and its use was limited to certain classes of people.

Of course as the Europeans displaced the Indians they brought in their own plants of economic value. Cocos Nucifera, the coconut, has spread across much of the tropics and was brought to the Caribbean to supply uncontaminated fresh provisions for sailing ships. The palm trees were planted in Jamaica, near the sea-coast and harbor settlements, during the development of the sugar plantations and in the post emancipation era when coconuts were planted around cane pieces to supply refreshment at crop time. They probably arrived in St. Croix in a similar manner. 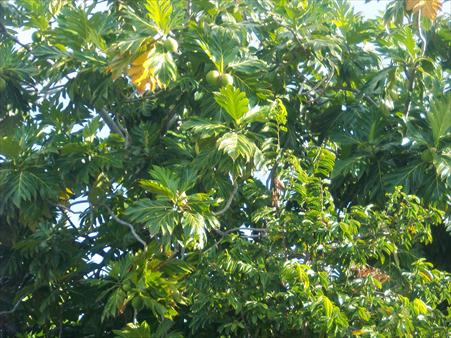 Breadfruit (Artocarpus altilis) is a species of flowering tree in the mulberry family that is native to the Philippines. The late-18th-century quest for cheap, high-energy food sources for British slaves prompted colonial administrators and plantation owners to call for the introduction of this plant to the Caribbean. A cash bounty and gold medal for success in this endeavor was offered. In 1787 William Bligh was appointed commanding lieutenant of the HMS Bounty, and instructed to proceed to the South Pacific for this task. The Bounty remained in Tahiti for five months during which over 1000 plants were collected, potted and transferred to the ship. Within a month of leaving many of the crew mutinied, expelling Captain Bligh and supporters in a long-boat, and returned to Tahiti. Bligh survived the ordeal, sailing with 18 loyal crew the 6710 km to Timor, reaching there in late 1789. In 1791 Bligh commanded a second expedition with the Providence and the Assistant, which collected live breadfruit plants in Tahiti and transported these to St Helena, in the Atlantic, and St Vincent and Jamaica in the West Indies. 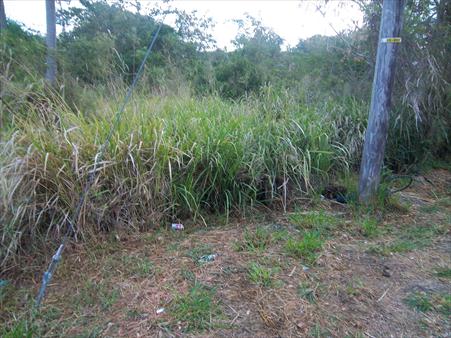 Not to be outdone, the Africans brought their plants of economic value to St, Croix, Gineau Grass (Urochloa maxima) is a large non-native grass growing in the island. Guinea grass is native to Africa and blooms year round. It is common in fields, groves, roadsides and other disturbed sites from the East to West end. It can be used for long term pasture if fertility maintained. It is ideal for cut-and-carry forage, although bristly types may cause discomfort to the forage collector. It is reasonably palatable to animals when mature, providing good roughage. It has been used successfully for making silage and hay . This grass would have had value as bedding or animal feed. 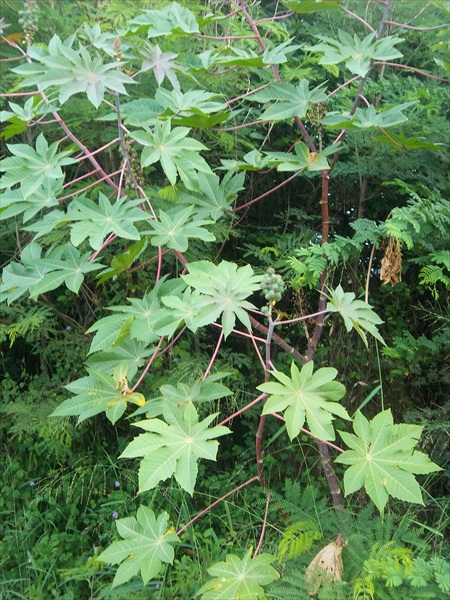 The castor oil plant, Ricinus communis, is a species of flowering plant commonly referred to as castor bean but despite its name, is not a true bean. Castor is indigenous to the southeastern Mediterranean Basin, Eastern Africa, and India, but is now widespread throughout tropical regions. Castor seed is the source of castor oil, which has a wide variety of uses. The seeds contain between 40% and 60% oil that is rich in triglycerides, mainly ricinolein. The seed contains ricin, a very deadly toxin, which is also present in lower concentrations throughout the plant. The plant was valued for both it’s decorative beads and Medicinal value.

It would appear that more recent imports have been selected to be brought to St. Croix for nothing more than their beauty and there are no mechanisms in place to stop the continued importation of invasive species to the islands.

Our local Po Mo Orchid (Bauhinia variegata) also called the Poor Mans Orchid or Purple orchid tree has been described “as staggeringly beautiful when in bloom – and it blooms for several months!” The Florida Exotic Pest Plant Council lists the orchid tree as a Category 1 invasive species. This category identifies “invasive exotics that are altering native plant communities by displacing native species, changing community structures or ecological functions, or hybridizing with natives”. This was one of the original eleven species that the Florida Nurserymen and Growers Association recommended for removal from the market by its members. Of course many other species in the Virgin Islands could be described as invasive exotics and none are quite as beautiful except perhaps for our most recent invasive exotic which appears to be a variant of an American wildflower, woodland blue phlox.

I am not really sure how it got here but I started noticing in the past 10 to 20 years and when I asked about it, I heard it was brought in from the states by an Arizona snow bird who missed her blue wildflower. I am not schooled in the wild flowers of the southwest US but it is quite similar to the woodland phlox I grew up with in the Northeast US. It is hardy species aggressively colonizing St. Croix and because of it’s beauty, most people don’t care and are learning to live with it. If anyone can positively identify it please let me know.

Don’t forget to visit the photo album at facebook.com/hikestcroix.

I have been hiking the hills and beaches of St. Croix, Virgin Islands for over 35 years and in retirement, decided to become a Heritage Hiking Guide specializing in the local history, geology, plant life and environmental changes that accompanied all groups of settlers over the last 3000 years. Unfortunately, aging of my body has temporarily limited my aggressive physical activity and I am using my intrinsic curiosity to explore the very obscure history of St. Croix prior to World War I. The oldest recorded History was dominated by the actions of Absolute European Monarchs who claimed ownership of the Island. Of course, all their actions were reported upon by official scribes who were controlled by censorship. Regardless of the outcome, reports were always positive until the king was dead and a new monarch crowned.
View all posts by John Boyd →
This entry was posted in 2012 Season, Hiking in Princess!, St. Croix Plants, Uncategorized and tagged St. Croix Hiking, St. Croix Plants, St. Croix Vacation. Bookmark the permalink.

3 Responses to St. Croix and 2000 Years of Imported plants